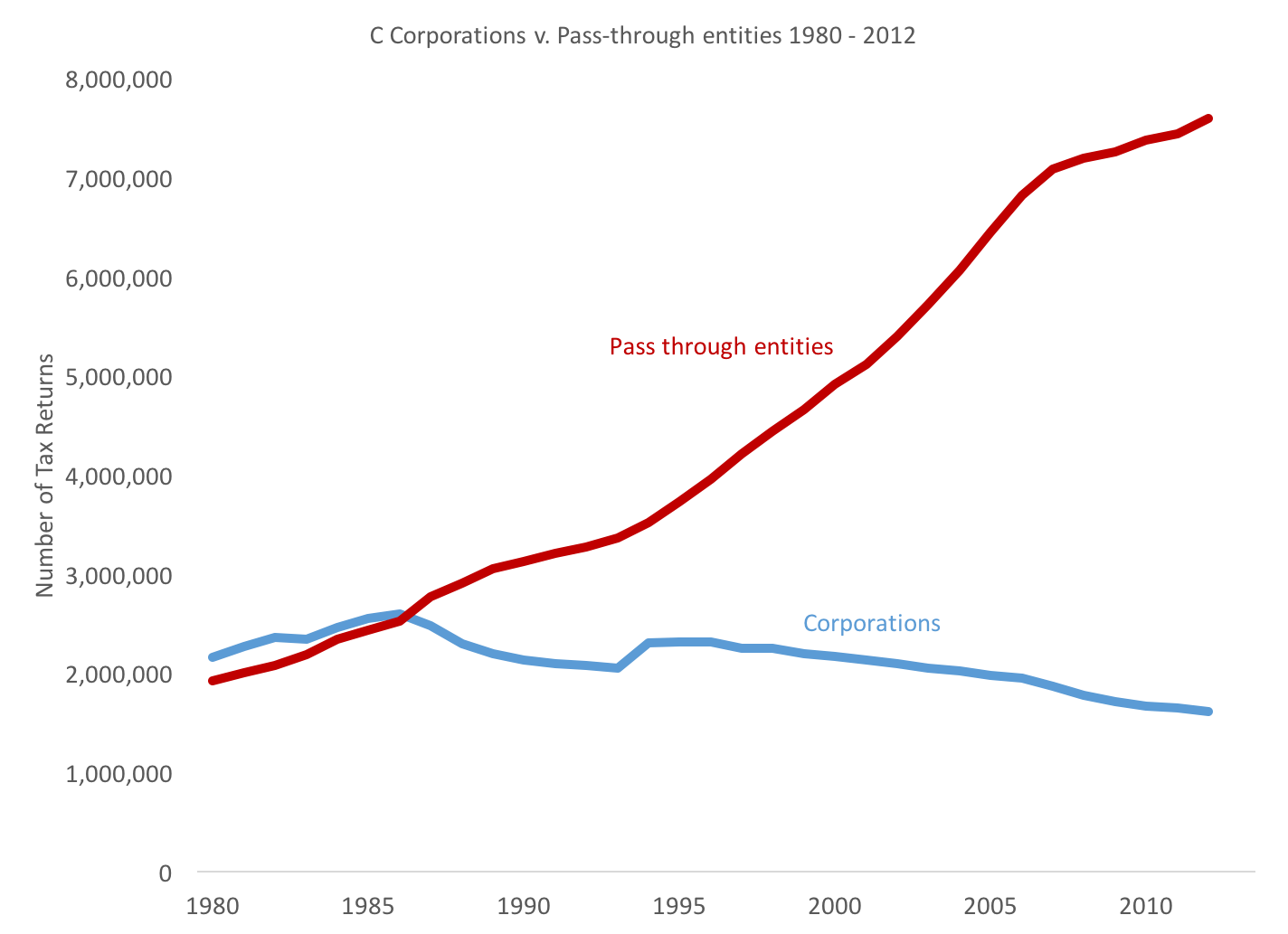 Data on business incorporations by legal entity type is maybe not so surprisingly difficult to locate. Business entities are creatures of state law, shaped in part by federal tax and securities law.

The Internal Revenue Service data on filed tax returns is grouped into three broad categories: corporations, partnerships, and sole proprietorships. Setting aside sole proprietorships, the IRS data demonstrates a clear long term preference for corporations. The flattening of the growth in corporations since 2005 raises the question about what is going on underneath these broad buckets.

The first problem with the IRS categorization is that it does not capture the economic (tax planning) strategies that drive entity selection. The IRS division is mistakingly based on legal form rather than tax treatment.

It is more illuminating to organize the entities by tax classification: corporate and pass-through entities.

As reported, the IRS data lumps S Corporations with C Corporations. This is rational from a state corporate law perspective since they are both usually organized according to the corporate statute of the state of incorporation. Both share characteristics of corporations. The “C” and “S” refer to federal tax status (specifically the relevant chapter of the Internal Revenue Code), not a state law designation.

Under federal tax law, C and S Corporations differ dramatically. C Corporations operate under a “double taxation” regime. The corporate entity is taxed on its income; the shareholder is taxed on profits paid as dividends.

For purposes of organizing startups, forming active joint ventures, and managing corporate entities, the distinction between corporations and pass-through entities is still not fine grained enough.

It is also clear that number of corporations and partnerships (all types, excluding LLCs) have steadily declined since the mid 1980’s. Corporations seem to have enjoyed a brief renaissance in the mid-1990’s before resuming their gradual decline.

It is important that we make another adjustment to the IRS data. The IRS data classifies LLCs as a type of partnership, along with general and limited partnerships. The historical reason is understandable.

S Corporations rule the roost in large part because the combination of tax status and corporate form from the 1950’s. Wyoming first adopted a limited liability company statute in 1977. The IRS first began reporting LLCs as a separate line item in the tax return data in 1993.

LLCs did not take off until 1997 when the IRS’s adoption of the “check-the-box” rule - that businesses organized as LLCs could decide whether they wanted to be taxed as partnerships or corporations - became effective. For a useful history of limited liabilities companies, see this article published by the American Bar Association.

So LLCs are usually pass-through entities like partnerships. LLCs are, however, distinct legal entities under state law with unique characteristics. Therefore, it is important to peel them out of the bundle of partnerships and look at them on their own.

What are the implications of these long term trends?

S Corporations outnumber all other entities 2:1

S Corporations clearly lead the pack (except for sole proprietorships) with reasonably steady growth for over 30 years. With 4.2 million S Corporations filing tax returns in 2012, there are almost two S Corporations for every LLC, the next closest rival.

The S Corporation was the primary alternative for businesses wanting tax benefits over the double taxation regime for C corporations’ income and dividends until limited liability companies came onto the scene.

LLCs are now the most popular legal entity

While it is tempting to conclude that S Corporations are substantially more popular than LLCs, this conclusion is based on the total number of legal entities. S Corporations have a more than 15 year head start on LLCs. Adjusting for that head start, the data reveals that LLCs are eclipsing S Corps.

There are two indicators of the parity between S Corporations and limited liability corporations. One simplistic approach is to back out the 1,785,371 S Corporation returns filed in 1992, the year before the IRS began reporting LLC returns as a separate line item. With that adjustment, LLCs almost catch up entirely to S Corporations by 2012: 2.4 million S Corporations; 2.2 million LLCs.

The 30 year chart of this data is revealing, especially after the “check-the-box” ruling on LLCs:

These trends and the IRS data are certainly no substitute for legal advice about which entity is suitable for any given startup, joint venture, or corporate entity.

For lawyers and corporate secretaries responsible for a significant corporate registry, this data serves as a useful benchmark of existing and new entities in the corporate family.

Get important news and analysis about legal entity management.

This email address is being protected from spambots. You need JavaScript enabled to view it.